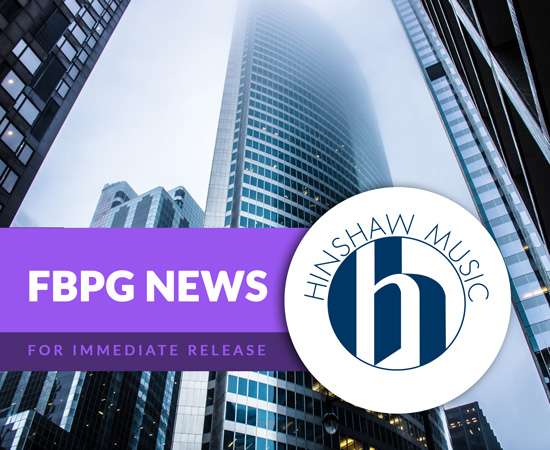 After a forty-year career with Hinshaw Music, President Roberta Whittington announced today that she will be retiring effective September 1, 2016.  “It’s been a joy and privilege to work with the staff and writers of Hinshaw Music all of these years.  They’re really not just colleagues to me; they’re more like family.  I will miss them all, but I know that the future of the company and the music will be in excellent hands,” says Ms. Whittington, who will stay on with Hinshaw Music as a consultant.

To that end, the Board of Directors of Hinshaw Music also announced that they have approved a transaction that will transfer the storied publisher to Fred Bock Music Company.  “Don Hinshaw and Fred Bock started their firms at about the same time and worked together in the publishing field continuously for over twenty-five years,” says Fred Bock Music President, Stephen Bock, the son of the company’s founder. “This feels like two families coming together, and I couldn’t be more proud of the new union.”

The Hinshaw Music catalog contains over 2,700 high-quality music publications for choirs, vocal soloists, and organists, including significant works by Dan Forrest, Mark Hayes, Grygori Orban, Alice Parker, Andre Thomas, Frank Ticheli, and Mack Wilberg.  Choral pieces such as Keep Your Lamps (Thomas), Earth Song (Ticheli), To Love Our God (Hayes), and Cindy (Wilberg) have been sung by thousands of choirs around the world, while Requiem for the Living (Forrest) is one of the most significant major choral works to be published in this century.

“Fred Bock Music Company and Hinshaw Music have long been synonymous with quality choral music and resources for churches and choirs,” added long-time Hinshaw Editor, William Carroll.  “The best writers in the industry are in both catalogs, and it is an honor for me to have been asked by Steve to continue on with him and his team.  Together we’re going to build upon what we’ve been doing for over forty years.  That’s exciting!”

The transfer of Hinshaw Music became official on Monday, August 1, 2016.  Hinshaw Music now joins all of the Fred Bock Music Company catalogs to be distributed worldwide by Hal Leonard Corporation. Interested retailers can contact Hal Leonard at 1-800-554-0626 for more information.

Hinshaw Music is a Sacred choral music publisher established in 1975 by Don Hinshaw an an imprint of the Fred Bock Publishing Group.