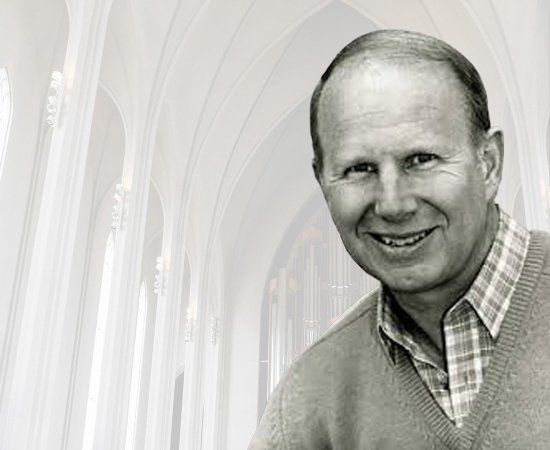 Fred Bock is regarded as one of the most recognized and respected leaders in the church music world. He was an esteemed arranger, choral director, clinician, composer, music publisher, organist, pianist and studio musician.

Born and raised in Great Neck, New York, Bock always knew he had a passion for music. At the age of 6 he learned how to read sheet music and play instruments, the first one being the piano. At the age of 12, he began to play the organ. Bock attended Ithaca College, New York, where he received his B.A. in Music Education, and earned his Masters at the Church of Music at the University of Southern California.

At 24 years old, Fred Bock became the founder and Director of Publications for the music publishing branch of Word, Inc., all while completing graduate courses at the University of Southern California. He dedicated 7 years to the company, later resigning to become the founder of Gentry Publications, an educational music company which offers sacred and secular arrangements for houses of worship. Overtime, Bock expanded his interests and developed several more publishing companies, the two largest being Gentry Publications and Fred Bock Music Company, a music publisher of church music for choir, organ and piano. Through the years, he acquired the Raymond A. Hoffman Company, a supplier of operettas for grade-school use; the H. T. FitzSimons Company, a supplier of organ and choral music for worship, as well as the Hamelle edition of Gabriel Faure’s REQUIEM; and Fox Music Publishing. These publishing companies and more encompass Fred Bock Publishing Group as we know it today.

Along with his entrepreneurship, Fred Bock was more than a businessman. Bock was also an avid lover of music, active member of church communities and an accomplished composer. He served as the Minister of Music at Hollywood Presbyterian Church for 18 years, and at the Bel Air Presbyterian Church, Los Angeles for 14 years. In 1976, he became the Editor of Hymns for the revolutionary collection Family of God, a passion project he had begun developing 15 years prior. Since its release, the hymnal has sold over 3 million copies across North America and beyond.

As a music artist, Bock worked as a keyboard-recording artist for secular and religious markets, and held the honor of frequently conducting Disneyland’s Candlelight Christmas Concert, which encompass two 1,000 voice choirs, a 50-piece orchestra, bell choir, soloist, and thousands of delighted audience members. His work as a studio musician can be heard in dozens of films and television shows, numerous studio recordings and contributed in an arrangement in Disneyland USA’s very own Haunted Mansion.

A Legacy of Music and Faith

Fred Bock passed away in July, 1998 due to complications following a surgery. His legacy lives on through his loving family; his wife, Lois, and three children, Stephen, Jonathan and Sandy. For those who knew him personally, he is remembered for his joy, his keen sense of humor, his love for the piano and his deep faith in God. His music lives on through his recordings, compositions and arrangements, and will always be highly regarded for his prominent mark within the music industry.

Regarded for his imprint within the music industry, Fred Bock’s memory is honored through numerous awards and establishments. Named after our founder, the Fred Bock Institute of Music (FBIM) is the music and worship institute of the Brehm Center for Worship, Theology, and the Arts at Fuller Theological Seminary. FBIM serves Brehm’s services by advising and mentoring students who lead the Chapel ministry of the seminary, providing educational online courses, hosting conference events and concerts, offering graduate-level instruction for music and worship programs, and overseeing the Jubal House publication imprint.

The Fred Bock Lifetime Achievement Award is annually presented by the National Association of Church Musicians, and was created to honor an individual who best embodies the professional excellence that defined Fred Bock’s career. The first award was presented in 2005 to Paul Salamunovich, a Grammy nominated conductor and educator. Since then, the award has been granted to an array of talented individuals, such as choral director Albert McNeil, organist Frederick Swann, hymn writer Bryan Jeffery Leech, choral director/baritone Douglas Lawrence, and world-renowned composer and conductor Mack Wilberg.